Peace Action Calls for Independent Investigation into Deaths in Gaza Protest, Asks U.S. Politicians to Stand Up for Human Rights

The right to demonstrate for change in government policy without fear of a violent retaliation is a cornerstone of international human rights. Eighteen Palestinians lost their lives in the recent protests in Gaza and more than 1,400 were injured. Independent reports indicate that the violence by the Israeli Defense Forces was egregiously disproportionate. A Human Rights Watch statement reported:

[T]he Israeli government presented no evidence that rock-throwing and other violence by some demonstrators seriously threatened Israeli soldiers across the border fence. The high number of deaths and injuries was the foreseeable consequence of granting soldiers leeway to use lethal force outside of life-threatening situations in violation of international norms, coupled with the longstanding culture of impunity within the Israeli army for serious abuses.

We here in the U.S. have to recognize that this protest was directly related to recent moves by the Trump administration. In fact, these protests, which are planned for six weeks, are designed to culminate around the same time when the U.S. embassy in Israel relocates to Jerusalem in mid-May. The embassy move has angered not only Palestinians, it has generated protests in many Muslim nations. At the march last week that turned violent, protesters carried signs critical of Donald Trump who has slashed $65 million in aid funding for the Palestinians in addition to deciding to move the embassy. All of that, on top of the desperate humanitarian situation in Gaza, added to a combustible situation.

The violence in Gaza was not only indiscriminate and disproportionate it was predictable and avoidable. Senior Israeli officials gave an unlawful green light to use lethal force against the protesters. When the Israeli Defense Forces announced ahead of time that they were deploying 100 sharpshooters along the border, human rights advocates warned about what should have been obvious — stationing sharpshooters at the site of a political protest and march was a recipe for human rights violations. In fact, a headline Newsweek article said succinctly: “TRUMP’S JERUSALEM EMBASSY COULD CAUSE A BLOODBATH IN GAZA AS ISRAELI MILITARY DEPLOYS SHARPSHOOTERS.”  Tragically these predictions were right.

Peace Action joins the calls of many, including U.N. General-Secretary António Guterres, for an independent and effective investigation into the shootings. Accountability for the decisions that went into this tragedy is critical. We also call for an end the blockade of Gaza, which is contributing to one of the worst humanitarian crises in the world right now.

It’s critical that members of Congress speak up and stand up for human rights. Members of Congress should condemn the use of live fire against protesters, should oppose the U.S. efforts to block an investigation of the protesters’ deaths at the U.N., and should call for an end the tragic blockade of Gaza. The handful of members of Congress who have spoken out against the Israeli military’s disproportionate use of force already, including Senator Bernie Sanders and Representative Betty McCollum, deserve thanks and they will hopefully be joined by others. People who are concerned about the violence should call their member of Congress and ask them to speak out against the violations of human rights.

The protests in Gaza are scheduled to continue over the next few weeks so there is a danger of continued violence. In fact, the Israeli response seems calculated to take the wind out of this period of protest. It is critical that U.S. leaders engage to hold the Israeli government responsible for its violations of human rights. These violations are not unique to the Israeli reaction to this particular protest but are part of a long history of the Israeli military using disproportionate violence against the Palestinians.

Beyond holding the Israeli government accountable for disproportionate acts of violence, the U.S. has both the capacity and the responsibility to demand an end to the host of oppressive policies employed by the Israeli government against the Palestinian people, and to facilitate a peace process that upholds the rights to dignity, sovereignty, and security for all people. The Palestinians deserve to be free and to enjoy their own sovereignty, and until then their right of self-expression and protest without violent repression deserves strong support. 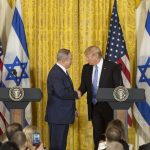