Silver Spring, MD — April 21, 2014 — On the heels of what could be a close primary election this coming Tuesday, April 26, Peace Action, the nation’s largest peace organization, endorsed Representative Donna Edwards (MD 4) for U.S. Senate in Maryland.
“We have long known Rep. Donna Edwards as a community advocate and we’re honored to endorse her for Congress. She has been a strong, independent, pro-peace and justice champion in the House of Representatives, and we need more like her in both Houses of Congress. Peace Action is proud to endorse Rep. Edwards for U.S. Senate from Maryland,” said Kevin M. Martin, the group’s executive director.
The nearly 60 year-old organization pointed out that Edwards’ voting record in the House scored consistently high and even doubled that of her primary opponent, Representative Chris Van Hollen (MD 8).
“”I am grateful to receive the endorsement of Peace Action and Peace Action Montgomery in my race for the United States Senate. Together, we have fought for human rights, economic justice, and an end to unjust wars. I look forward to continuing to work with them to realize our shared dream of a more peaceful world for all,” remarked Rep. Edwards while on the campaign trail.
Peace Action was founded on abolishing nuclear weapons and is known for opposing the Iraq war, supporting diplomacy and the Iran agreement and reducing the Pentagon budget.  Its national headquarters is in Silver Spring, Maryland.
“Ever since she participated in our candidate forum in 2008, Rep. Donna Edwards stood out as the progressive candidate. As my Representative, she walked the talk by consistently voting progressive and peace values. She is exactly who we need in the Senate,” concluded Jean Athey, a steering committee member of Peace Action Montgomery County, the local affiliate of Peace Action in Maryland’s most populous county.
###
Congress, diplomacy, Donna Edwards, Economy, Maryland primary, Peace, Peace Action

Bernie needs your support for his pro-peace agendaelections 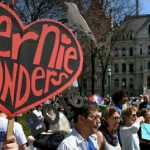 Getting the Story Wrong: The Distortion of American Politics by the PressElection 2016, elections, media